What is a Project in Keen?

The first step in integrating your application with Keen is the creation of a project. You can think of a project as a data silo. The data in a project is completely separate from data in other projects.

When should I create a new/separate Project?

If you’re a B2B user, you may desire to separate each of your customer’s data into its own dedicated project. The benefit of using a dedicated project for each customer is that you are leveraging Keen’s data structure as a method of containing and securing data.

By providing each of your customers with their own separate project, you can contain each of your customers’ data in their own dedicated data silo. Since each project receives it’s own set of API Keys, it adds an additional form of security that prevents one customer’s data from being written to and contaminating another customer’s data store. Similarly, customers with data in one project will not have the access to analyze data from a different project.

Here is a basic list of use cases where it makes sense to create multiple projects to logically separate data:

If you run your app on multiple platforms — iOS and Android for example — we recommend storing that data in a shared project rather than creating separate projects. Having your iOS and Android events in a single project will make it much easier to do analysis across platforms. You’ll be able to ask questions like: “How many people are using our app? How many people are using our new feature?” You can always use filters to do comparisons between the platforms — just make sure you include a platform property when sending data.

As an alternative to creating each project by hand in the Keen web UI, you can utilize this Project Provisioning feature to programmatically create Keen projects as your new users sign up.

The new Project you create via the API is a full-fledged Keen Project, no different than if you had hand-created it. To programmatically create a new project via the API see how in our API docs: Project Creation via API.

Creating a New Project by Hand

These steps show you how to create a project from our user interface Settings Panel.

Fig 2: Name Your Project –> Then press the “Add Project” button 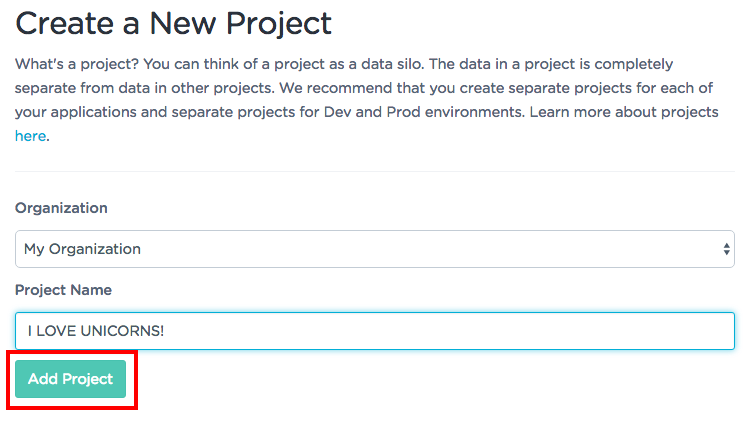